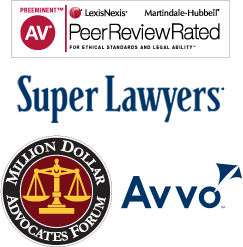 The Arlington Police Department has reported that one individual died in a four-vehicle accident that occurred on westbound I-20 shortly before Cooper Street on Monday, May 9.

According to preliminary investigations, the accident occurred after an SUV ran over an obstruction on the road. A Hyundai behind the SUV swerved to avoid the same obstruction and crashed into the center median before an 18-wheeler hit the Hyundai from behind. A pickup truck was also involved in the incident. The male driver of the Hyundai was killed and declared dead at the scene, while another individual was treated for injuries at the scene of the accident.

The attorneys at Woodson Law Firm see the trauma caused by multi-vehicle accidents such as this and know how overwhelming the physical and emotional injuries are for victims and their families. Our thoughts and condolences are with the family and friends of the victim in this accident as they mourn the loss of their loved one.

Delbert Latham, his wife, and his son, Kaysen, were visiting the Wonderland Amusement Park in Amarillo, Texas last Thursday, April 28 when Kaysen’s seat belt malfunctioned on the Mousetrap roller coaster.

In a video captured by the father, Delbert was shown holding onto Kaysen after his seat belt released during the ride, prompting Delbert to say, “I’ve got you. You’re fine.” Delbert Latham claimed that after the ride was finished and he and his son were both safely on the ground, he told the ride operator about the incident, causing the operator to apologize profusely but admit that the mishap had been “happening sometimes”. In a statement, Wonderland Amusement Park said that the ride did not originally have seat belts at all, but that the company took extra precautions by installing seat belts on the ride.

The attorneys at Woodson Law Firm in Fort Worth understand the fear that can accompany the sudden malfunction of a product. If you have been the victim of a defective toy, tool, or appliance, we may be able to help you hold manufacturers accountable. Call our office at (817) 338-0303 to discuss your situation and explore your legal options.

Two individuals lost their lives on Tuesday, April 5 at around 8:00 p.m. when the motorcycle they were riding on the northbound service road of State Highway 121 at Plano Parkway in The Colony, Texas was struck by a possible drunk driver, who ran a red light.

The deceased were identified as 42-year-old husband and wife, Jeremy and Stephanie Byington, who were both from The Colony. According to preliminary investigations, the couple was riding their motorcycle along the Plano Parkway when a northbound SUV crashed into them.

A GoFundMe account has been created to help the family of the victims with burial expenses.

Plano police have determined during their investigation that the suspect, whose name they have yet to release, may have been drinking at the time of the incident. They added that they will only release the suspect’s name publicly when charges have been formally filed.

On Friday, February 26, a Harris County jury in Texas awarded $11.485 million to a teenager who had suffered a traumatic brain injury after a fall at Houston’s Cosmic Jump Indoor Trampoline Park back in 2013.

According to court documents, the teenager sustained a head injury after he fell through a torn trampoline and onto a concrete floor below. Prosecutors were able to prove that Cosmic Jump had prior knowledge of the existence of the torn trampoline but failed to remedy or repair the contraption or even to warn park-goers of its potential dangers.

The almost $11.5 million award included $5.845 million in compensatory damages for the teenager’s future medical needs and his loss of earning capacity and an additional $6 million in punitive damages against Cosmic Jump to prevent such negligent actions from happening in the future.

The first trampoline park opened in Las Vegas, Nevada in 2004. Currently, there are over 450 trampoline parks operating in the United States, with six of them in business in the Houston area, according to the International Association of Trampoline Parks.

Victims who suffer serious injuries in accidents will also have to deal with extensive medical bills and recovery periods that can cost a great deal of money. For these victims, recovering compensation from the responsible party can be the difference between recovery and financial ruin. To speak to the legal team at the Woodson Law Firm about your options after suffering a personal injury, call us at (817) 338-0303 today.

First of GM personal injury lawsuits to be tried Monday

The first trial of lawsuits filed against Detroit, Michigan-based automaker General Motors regarding the faulty ignition switch which led to accidents and injuries is scheduled to take place on Monday, January 11. This bellwether trial will focus on the complaints brought by plaintiff Robers Scheuers.

According to Scheuers’ lawsuit, the air bag of his 2003 Saturn Ion did not deploy during a crash in May 2014, despite the fact that he had followed GM’s advisory and removed all keys from his key ring except for the ignition key. Scheuers is also complaining that GM put customers in unnecessary danger by not recalling the vehicles at an earlier date and not facilitating repairs in an adequate manner.

GM started recalling 2.6 million vehicles with the defective ignition switch – which can cause engine stalling and non-deployment of air bags – in February 2014.

If you need legal advice or representation for your personal injury or product liability case, and you live in Fort Worth or other areas in Texas, do not hesitate to contact our attorneys at Woodson Law Firm by calling our offices today at (817) 338-0303.

A two-vehicle collision that happened at around 1:30 a.m. on Monday, December 7 in the westbound lane of Interstate 30 between Oakland Boulevard and Beach Street in east Fort Worth, Texas has resulted in the death of one woman and the serious injury of another.

According to preliminary investigations, the woman was thrown out of her vehicle after it was hit by a minivan along the roadway, police spokeswoman Corporal Tracey Night said.

Police officials noted that the accident happened while the victim’s vehicle was stopped along the freeway. Officers are still working to determine why the vehicle was stalled, and currently suspect that it was due to a previous accident.

The woman, who died at the scene of the accident, was identified as the one who was driving the vehicle. Another woman, who was a passenger in the vehicle, sustained critical injuries during the crash and was taken to John Peter Smith Hospital, MedStar Health spokesman Matt Zavadsky said.

Intoxication manslaughter suspect arrested after three-vehicle collision in Fort Worth

Fifty-year-old Carmona Perez Margarito was taken into police custody on Sunday, November 15 in Fort Worth, Texas on charges of intoxication manslaughter for allegedly causing a three-vehicle collision that claimed the life of an individual and sent three others to the hospital in critical condition.

The Fort Worth Police Department responded to the scene of the accident on the southbound North Freeway at Northside Drive at around 2:35 Sunday morning.

Margarito had been driving a green Ford F-150 pickup when the accident happened, announced police spokesman Officer Daniel Segura. The specific details of the accident are still under investigation and have not been released to reporters at this time. Officers believed Margarito to be drunk at the time of his arrest. The freeway was closed off after the accident while officials worked to investigate and clean up debris from the collision. It was reopened at 7:00 in the morning, according to police reports.

Two residents of Forest Hill, Texas, were killed in a two-vehicle accident on Sunday, November 1 when an alleged drunk driver struck their car in a residential area. The victims were identified as 76-year-old George Moon and 63-year-old Beverly Gayle Moon.

According to preliminary investigations, George Moon began feeling ill on Sunday morning and decided to go to John Peter Smith Hospital in Fort Worth. Moon’s 45-year-old niece, along with her adult daughter, went to Moon’s home in order to take Moon and his wife to the hospital.

Moon and his wife, who were backseat passengers in the car operated by the niece’s daughter, were killed when 23-year-old Florida resident Jose Salinas-Gomez hit their car in a sport utility vehicle. Salinas-Gomez now faces charges of intoxication manslaughter and intoxication assault.

Six construction workers in Houston sustained multiple but non life-threatening injuries after a massive scaffolding collapse outside of a building under construction on Friday, Oct. 16.

Large piles of metal were seen lying on the ground next to a seven-story building. Senior Capt. Ruy Lozano of the Houston Fire Department told reporters that no passersby or first responders were hurt during the incident. Lozano also indicated that there were no reports of any missing workers.

Lozano  noted that they have no worries that the entire building would fall down; what they are afraid of is more scaffolding collapsing.

If you have been injured in the workplace or on the premises of another party, you may be eligible to pursue legal action in order to obtain a financial settlement. At the Woodson Law Firm, our Fort Worth personal injury attorneys can help. Call us today at 817-338-0303.

Former Fort Worth, Texas councilwoman Cathy Hirt and her husband, Darrell, lost their lives when the taxi they were riding in collided with a truck in Budapest, Hungary earlier this month on Friday, October 2.

Cathy Hirt’s brother and Dallas resident, Karl Csaky, said the Hirts were supposed to be flying back to the United States on Saturday after their two-week vacation in Europe, which included trips to Prague and Vienna before a final stopover in Budapest, where Hirt’s parents had once lived, to visit relatives.

The Hirts were known for their charitable contributions and good work in the Fort Worth community. Cathy was a respected councilwoman who had had two bids for a mayoral position, and Darrell was a well-known kidney doctor in town.

The couple is survived by their three children, Karl Joseph, Alex, and Tina. Hirt’s brother said that preparations are underway for a funeral service that will celebrate their lives and mourn their deaths.